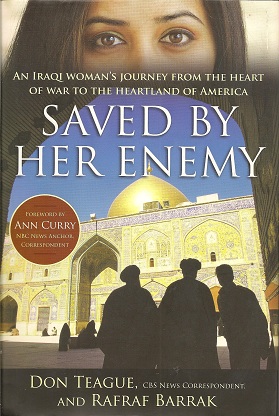 Saved by Her Enemy: An Iraqi woman's journey from the heart of war to the heartland of America

Tiny ding at bottom of back board . . 321 pages. For her entire life, Rafraf, a devout Muslim, had been told that Americans were the enemy. Her understanding of the world, of her place in it, and of the United States had been steeped in the culture of Iraq under the rule of Saddam Hussein. Yet, in the midst of insurgents attempting to kidnap and kill her, she found herself on the receiving end of lifesaving help from those she considered her enemies.Rafraf suddenly finds herself living with a Christian family in the Bible Belt of America. Nothing had prepared her for this new reality—the li...
View More...