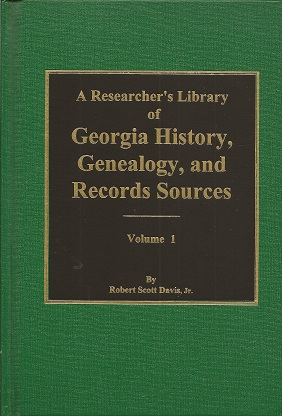 Vol. 1. 530 pages. Bob Davis has compiled into one indexed volume his MOST significant articles on and abstracts of Georgia records. More than half of this book, A Researchers Library, however is new material spanning virtually all Georgia for all of her more than 250 years. This is some of the best genealogical material to be found in one reference book encompassing the years from colonial times down through the Civil War. Chapters included in this book are on Georgia's First Settlers; Lost Colonial Georgia Plats; Records from the Peter Force papers; The Georgia Provincial Rangers; Land Grants under the Trustees, 1733-1739; a Medical Miracle Worker; Lost Georgia Land Grants under the Trustees 1775 and 1778; Revolutionary War Soldiers in the American State Papers; Bounty Script to Soldiers and their heirs, 1833-1870; Officer index to Saffell's records of the Revolutionary War; Death dates of Revolutionary War Officers in the South; 1840 Federal Pension list for Georgia; Supplement to Knight's Roster; Supplement to Georgia Citizen and Soldiers; persons who may not have received Bounty Grants; Headright Caveats, 1777-1868; Dr. Newton's medical log, 1789; Some records from the Cuyler Collection; the Walton War - A Supplement; Indian depredation; 1810 Federal Census of Putnam County; Militia Roster, 1812-1815; Georgia's Roster of the War of 1812. Also chapters on Birth States of Georgia Federal Employees 1816 and 1819; Persons exempted to be allowed to be tested before the Bar; Missing page of the 1820 Census of Madison County; Applicants before Georgia's Board of Physicians, 1826-1881; Paddlers Licenses, 1825-1843; the Georgia battalion in the Texas Revolution; St. George Parish - Burke County; Gleaning from Georgia Newspapers; First settlers of Northeast Georgia; White men with families in the Cherokee Nation, 1830; Voters lists, 1834-1838; Counties in Georgia and Carolinas - an 1835 map; Enlistment oaths, 1861; Georgia Battalion, US Army, Confederate Pensioners, 1894; some Civil War memoirs; and Confederate Veterans at Bowden College. The Index mentions approximately 30,000 names.