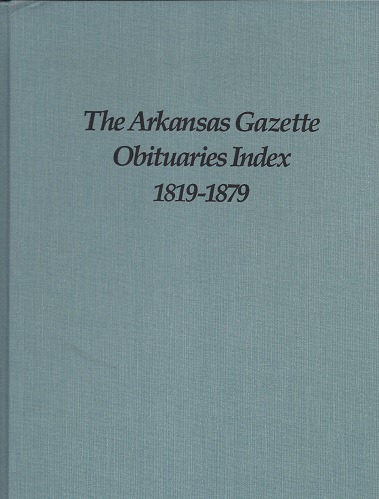 Book Condition: Fine with No dust jacket as issued

109 pages. This index includes 14,329 entries of unequivocal reports of death in which a person (s) is named between the years 1819 and 1879. The Arkansas Gazette for the same period lists 4,201 names under the heading "Deaths". This can be attributed to the inclusive policy of listing every mention of death, whether it appears in an obituary column or in the text of an article on another subject. If a person identified in an obituary used an alias, the index bears an entry under both the alias and the name given at birth. If the name appears spelled differently in two references of a death, it is listed as it is spelled. This index, arranged alphabetically, contains the last name of the deceased, followed by the first name, middle initial, title as given ( Mrs., Mr., Miss., Corp., Capt., Col., etc.), where death appears with month and day of the issue of the newspaper, page and column it appeared on.

Book Condition: Fine with No dust jacket as issued