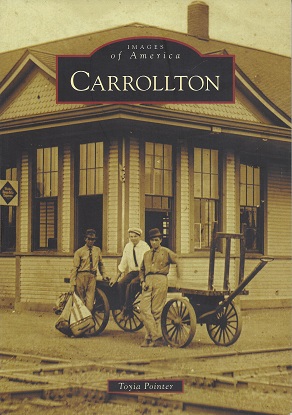 Bookstore sticker on inside of back cover . SIGNED and dated by the AUTHOR on the title page. 126 pages. Images of America. Signed by Author. Over 160 years ago, bear and buffalo roamed the prairie and Wichita Indians camped on the banks of the Elm Fork of the Trinity River. Settlers from places like Illinois, Missouri, Kentucky, Tennessee, and as far away as England and Ireland began arriving in North Texas. Texas was not yet a part of the United States when Sam Houston, as president of the Republic of Texas, entered into an agreement with the Peters Colony Company to attract settlers to the area with the promise of free land. Carrollton likely received its name from one of these groups that emigrated from Carrollton, Illinois. The city grew as it became a railroad hub and later transitioned from a rural community to a prosperous Dallas suburb. In 1976, the city participated in many national bicentennial celebrations, and volunteers restored and opened a museum to honor its rural beginnings and courageous settlers.