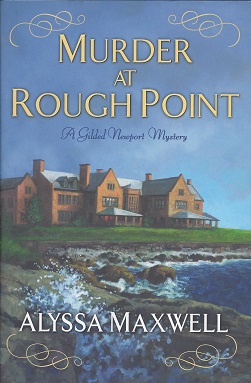 Protected in a removable Brodart archival cover. Blue boards and spine with title and author iprinted on spine in gold. Full number line 10 9 8 7 6 5 4 3 2 1. . 295 pages. In glittering Newport, Rhode Island, at the close of the nineteenth century, status is everything. But despite being a poorer relation to the venerable Vanderbilts, Emma Cross has shaped her own identity--as a reporter and a sleuth. Fancies and Fashion reporter Emma Cross is sent by the Newport Observer to cover an elite house party at Rough Point, the "cottage" owned by her distant cousin Frederick Vanderbilt, which has been rented as a retreat for artists. To her surprise, the illustrious guests include her estranged Bohemian parents--recently returned from Europe--as well as a variety of notable artists, including author Edith Wharton. But when one of the artists--an English baronet--is discovered dead at the bottom of a cliff, Rough Point becomes anything but a house of mirth. After a second guest is found murdered, no one is above suspicion--including Emma's parents. Even as Newport police detective Jesse Whyte searches for a killer in their midst, Emma tries to draw her own conclusions--with the help of Mrs. Wharton. But with so many sketchy suspects, she'll need to canvas the crime scenes carefully, before the cunning culprit takes her out of the picture next...