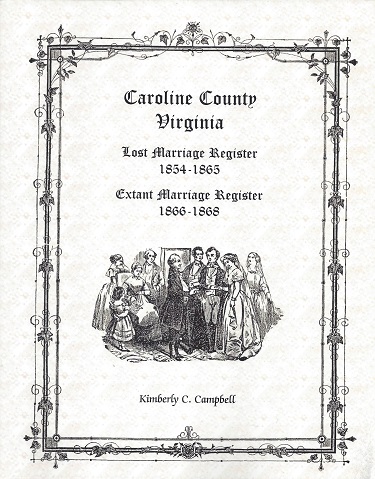 262 pages. Caroline County, Virginia, is known among family history researchers as one of the "burned records" counties. Hundreds, if not thousands, of priceless documents went up in smoke during the nineteenth century due to the ravages of the Civil War, or from a combination of poor storage, wooden construction and ineffective firefighting methods. Fortunately for researchers, Kimberly C. Campbell discovered a cache of Caroline County marriage records in the Library of Virginia in Richmond. She learned that clerks were required to make full copies of the marriage registers and send them to the state auditor in Richmond. Even though that city, too, was burned at the end of the Civil War, many of the marriage records survived and can be found in the Virginia Bureau of Vital Statistics. A deft compilation of many sources, this volume greatly expands upon the basic marriage records with the addition of information found in the extant marriage licenses as well as deeds, wills and chancery suits. Marriage bonds for the parents of the couples in the registers have been listed in the annotations when they have been found. Ms. Campbell's own knowledge of Caroline County families adds a further dimension to this work, and is bolstered by the contributions of other researchers she consulted.This large-format book contains the marriage records listed chronologically by book. Annotations include document citations, and reveal interesting information such as nickname or cause of death, which is not contained in the marriage records. A bride and groom's index completes this essential Caroline County resource.