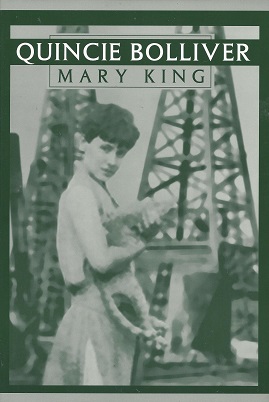 425 pages. Quincie, the motherless thirteen-year-old daughter of an itinerant muleskinner, is the captivating protagonist of this Depression-era novel set in the Texas oil patch. Her story's value resides not only in the viewpoint of a young girl who comes of age in the shadow of the derricks but also in the currency of her creators sensitivity to the natural world and environmental issues. Originally a 1941 Houghton-Mifflin Literary Fellowship Book, "Quincie Bolliver" is an extraordinary study in character, place, and the community of women weak and strong. From the moment the wise, lonesome Quincie and her stubborn, charming father, Curtin, arrive in Good Union, Texas, where the boom has passed and Judith Paradises boarding house stands as a tattered monument to bygone prosperity, King engages the reader in the passions and struggles of the small towns inhabitants. As beautiful and natural as its commanding realism, "Quincie Bolliver" is not only a remarkable first novel, but one that should stand for all time. Her grief was wide, touching the still trees, the wet coats of the grazing cattle, the lonely posts of the power line, the soft feathers of the heron. Her pity was for all things: for the leaf set spinning by the rain, for the drops of rain that fell and were lost, for the darkening sky itself, and for the tender earth that must lie forever open to the sky, racked to preserve the running heel-and toe-print of all who chose to pass.