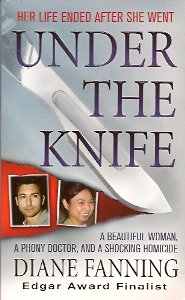 Under the Knife: A Beautiful Woman, a Phony Doctor, and a Shocking Homicide

Inscribed, dated and SIGNED by AUTHOR on the title page. Full number line 10 9 8 7 6 5 4 3 2 1. . 240 pages. Handsome, charming, and a fixture on the New York City club scene, Dean Faiello had built a thriving beauty business. But money was never enough for Faiello, whose hard-partying ways constantly left him on the edge of ruin. So he did the unthinkable and worked as a cosmetic surgeon - even though he had no medical degree, or training whatsoever. In the spring of 2003, a beautiful, successful woman named Maria Cruz went to "Doctor" Faiello for a relatively simple cosmetic procedure...and succumbed to a fatal complication while under his care. Faiello allegedly buried her corpse beneath a concrete slab at his Newark, New Jersey home - and went on the run. It was only after Cruz's body was found that the true callousness of Faiello's plan would be dissected...and he would be accused of putting her Under the Knife

Title: Under the Knife: A Beautiful Woman, a Phony Doctor, and a Shocking Homicide

Under the Knife: A Beautiful Woman, a Phony Doctor, and a Shocking Homicide