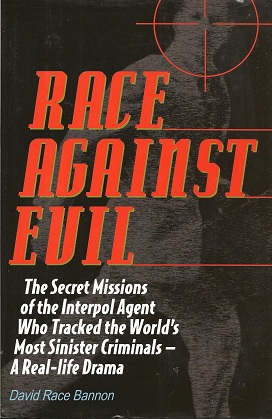 Race Against Evil: The Secret Missions of the Interpol Agent Who Tracked the World's Most Sinister Criminals ? A Real-life Drama

Full number line 5 4 3 2 1. . 320 pages. This electric narrative of suspense and intrigue delivers a firsthand account of heinous criminals and stern justice from the insider's view of David Race Bannon. At age 18, the American youth is recruited by Interpol after he is caught in a deadly riot in South Korea. Over the next 15 years, Bannon is trained to work in the darkest regions of humanity, to deny societal inhibitors against killing and embrace the agency's role as deliverer of grim justice to evildoers beyond the reach of the law. His missions take him from investigating the bombing of KAL 858 and infiltrating prisons in Korea to the disappearance of London's most notorious child pornographer and searching out terrorists and criminals in the United States. Disclosing the tactics, teamwork, weapons and combat techniques the world's secretive agency uses, he shares the joys and pains of victims and officers; the thrill of love under fire which ends when his fiancee, a French DST agent, dies in his arms during a savage confrontation with terrorist cells; and Interpol's role in capturing and punishing kidnappers and enslavers who traffic in human beings. Here also is the very personal, true story of a man on the front lines of international justice who struggles to reconcile his search for inner peace with the violence required to protect innocents. In his journey to reach the redemption he seeks, he is led to his ultimate encounter with his own destiny.

Title: Race Against Evil: The Secret Missions of the Interpol Agent Who Tracked the World's Most Sinister Criminals ? A Real-life Drama

Race Against Evil: The Secret Missions of the Interpol Agent Who Tracked the World's Most Sinister Criminals ? A Real-life Drama