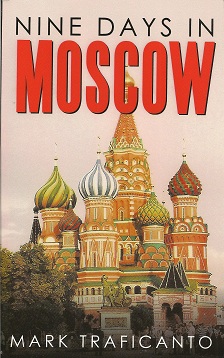 324 pages. Nine Days in Moscow is a true story of a middle age man who travels to Russia to visit a friend. He wanted to see in person what he viewed in the history books as a child, and to enjoy the nightlife in Moscow that he had heard was very enjoyable. What he encountered was much more than history and a few Russian women. It was the most significant emotional event of his life. The people he met, the things he learned regarding the Russian culture, and the way that he was accepted, dramatically and permanently changed who he was as a person. As he deals with the hates and prejudices of his past, the people of Moscow lead him down a path of self-realization. He has flashbacks to the sixties and seventies, and as he faces his feelings one certain young lady Svetlana, will make an impact on him that he thought was never possible. God working through her will open his eyes to a people and culture that he never thought he would embrace. His experience will erase the one last hatred that he will let go. This is a journey from prejudice to understanding. It is a story of ignorance to discovery. It is a book about cultural differences and finding that common ground. It is a path of hate to one of love. But more than anything it is about change. It is about change of mindset, change of heart, change in your relationship with people and with God. It is that significant emotional event that rocks your soul and takes you to a place you have never been before. Nine Days In Moscow will tug on every emotion that you have.