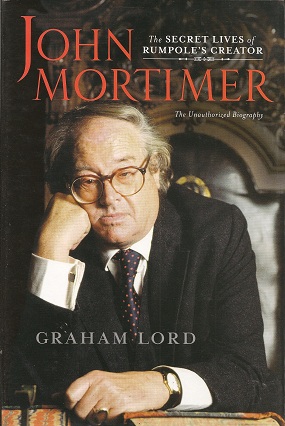 1/8 inch closed tear at top of back d j cover. 336 pages. In Britain every generation produces a national treasure, a lovable figure so English that he could not possibly be of any other nationality, and Sir John Mortimer is just such a figure. Mortimer has delighted millions all over the world with seven television series about the gloriously larger-than-life fictional barrister Horace Rumpole --- Rumpole of the Bailey --- as well as novels, autobiographies, stage plays, film scripts, short stories, television and radio plays, newspaper articles, and even an opera and a ballet. Laurence Olivier, John Gielgud, and Alec Guinness appeared in his plays, and among his greatest theatrical triumphs is his stage and television play A Voyage Round My Father. He won a British Book Awards trophy for Lifetime Achievement in 2005. Mortimer actually practiced as a barrister for thirty-six years, defending husbands, wives, pornographers, and murderers in court and starring as the real-life "Devil's Advocate" in several legendary obscenity and blasphemy cases in the 1970s, quickly becoming a liberal hero. Yet despite huge success, fame, and knighthood there lurks beneath that genial "champagne socialist" mask an unusually complex man who has been plagued by depression, doubt, insecurity, and an irresistible urge to commit adultery. Biographer Graham Lord, whose discovery that Mortimer had a secret son by the British actress Wendy Craig forced Sir John to admit it publicly in 2004, has interviewed scores of Mortmer's family, friends, mistresses, and enemies to write a frank and vital biography that reveals the startling reality behind the beloved public figure.