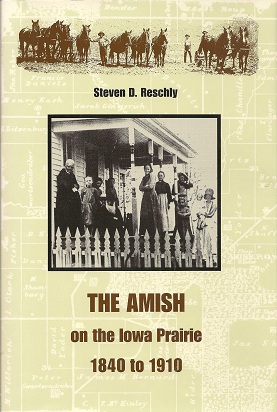 288 pages. Center Books in Anabaptist Studies. The Amish on the Iowa Prairie, 1840 to 1910 tells the story of how the Amish integrated themselves into a mid-American society, even as they preserved their own culture. Steven D. Reschly traces the Amish in Iowa from their initial settlement in the 1840s, through the community's experiences at the close of the nineteenth century when the rural economy of the United States had matured, and into the early part of the twentieth century. As Reschly demonstrates, the Amish experience of marginality and persecution in early modern Europe led them to develop a repertoire of actions and attitudes that helped preserve their community during migration -- an array of cultural practices and religious beliefs that contribute to what the Amish experience as the "portable community". In narratives of critical episodes, supported by quantitative and comparative analysis of census and land records, Reschly explores the paradoxical stability and adaptability of the Amish community in North America. Throughout The Amish on the Iowa Prairie, Reschly develops intricate portraits that illustrate aspects of the portable community, such as innovative agricultural practices, specific migratory patterns, and the Amish practice of distancing themselves from the wider society. He also examines gender and family relations, land ownership and inheritance, and participation in the Civil War, and includes an analysis of the dreams of Bishop Jacob Swartzendruber and the visions of "sleeping preacher" Noah Troyer. What emerges is a depiction of the Amish in Iowa that contradicts the common view that Amish communities are static and resist change.