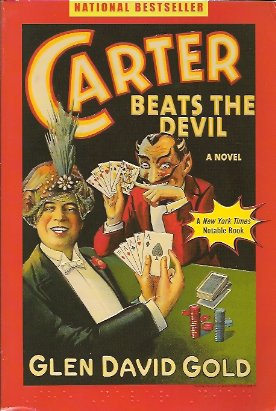 A little corner curl.. No spine crease. Full number line 10 9 8 7 6 5 4 3 2 1. Debut novel. . 496 pages. In Carter Beats the Devil, Glen David Gold subjects the past to the same wondrous transformations as the rabbit in a skilled illusionist's hat. Gold's debut novel opens with real-life magician, Charles Carter, executing a particularly grisly trick, using President Warren G. Harding as a volunteer. Shortly afterwards, Harding dies mysteriously in his San Francisco hotel room,and Carter is forced to flee the country. Or does he? It's only the first of many misdirections in a magical performance by Gold. In the course of subsequent pages, Carter finds himself pursued by the most hapless of FBI agents; falls in love with a beautiful, outspoken blind woman; and confronts an old nemesis bent on destroying him. Throw in countless stunning (and historically accurate) illusions, some beautifully rendered period detail, and historical figures like young inventor Philo T. Farnsworth and self-made millionaire Francis "Borax" Smith, and you have old-fashioned entertainment executed with a decidedly modern sensibility. Gold has written for movies and TV, so it's no surprise that he delivers snappy, fast-paced dialogue and action scenes as expertly scripted as anything that's come out of Hollywood in years. Carter Beats the Devil has a mustachioed villain, chase scenes, a lion, miraculous escapes, even pirates, for God's sake.Yet none of this is as broadly drawn as it might sound: Gold's characters are driven by childhood sorrows and disappointments in love, just like the rest of us, and they're limned in clever, quicksilver prose. By turns suspenseful,moving, and magical, this is the historical novel to give to anyone who complains that contemporary fiction has lost the ability to both move and entertain. --Mary Park