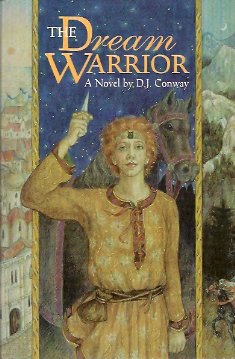 1.02 x 7.8 x 5.28 Inches. 335 pages. Dream Warrior. You'll share the adventurous tale of Corri Farblood, who, when just a child, is sold to the grotesque and sinister master thief, Grimmel. Forced into a life of thievery, she seems to have a natural talent for it. In fact, at 18, she is the best thief in the city of Hadliden. That is not the only natural talent Corri has. She has the ability to travel when daydreaming: dream-flying. This is a talent so valuable that the disgusting Grimmel forces Corri into marriage. His goal: to have her conceive a child carrying both her special powers and his own. In a daring move, Corri escapes her fate. Accepting the aid of a traveling sorcerer, she joins him on a quest for an ancient place of power. Along the way, she takes up with a warrior?a good thing, because Grimmel's assassins relentlessly pursue her. For an exciting adventure in a land beyond belief, join Corri, the sorcerer Imandoff Silverhair, and the warrior Takra Wind-Rider as they run across the land and face their personal battles. Follow Corri as she battles against time and her enemies to solve the mystery of her heritage and gain control over her potent clairvoyant gifts. Is she the mythical Dream Warrior who will free the people of Sar Akka? Will she learn the true meaning of companionship and love? What will happen when she confronts a fate that will test her powers and courage to the limit? Get the answers when you read The Dream Warrior.